Tragic death of Hilaree Nelson, an avid mountaineer in the Himalayas is not an isolated incident. When you are reading this article at least 26 mountaineers, all Indians are confirmed dead and some are still missing after an avalanche struck climbers in the Indian Himalayas. Rescuers are still searching for the missing as bad weather is hampering search and rescue efforts. A group of 34 young climbing trainees and 7 instructors most of them from the Himalayan States itself were caught in the week’s massive snowslide near the summit of Mount
Draupadi ka Danda II in Uttarakhand.

But such frequent and increasing death have brought home how perilous the Himalayas are. Experts and guides quoting data say they are rising due to an ever-increasing number of climbers and change in climate.

In the Himalayas, Nepal is home to the most popular peaks. Between 1950 and 2021, 1,042 deaths were recorded there, 405 of them this century alone. An analysis showed that a third of deaths are caused by avalanches and a third by climbers falling. Many also die from acute mountain sickness and exhaustion.

Among the mountain ranges the deadliest is 8,091-metre Annapurna massif, with 72 deaths for 365 ascents since the 1950s—or one for every five successful summits. Dhaulagiri and Kanchenjunga both have a death rate of over 10 percent. Steep passages and avalanche danger have earned Pakistan’s K2 the name “savage mountain”, with at least 70 fatalities since 1947. 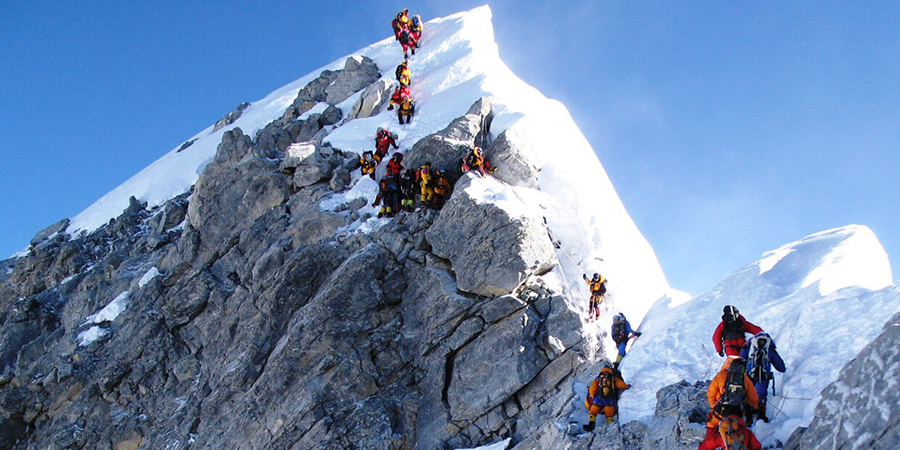 With so many deaths the Himalayas has even a Death Zone but puzzlingly named “Rainbow Valley”, about 8000 meters high in the mountain range. It is still having maximum dead bodies of the climbers who lost their lives and could not go forward or return. It also has landmarks like “Green Boots,” and “Sleeping Beauty” but these are names given to the corpses still left there for decades. The name ‘Rainbow Valley Everest’ has a rainbow in it because of the colourful jackets, boots, and bags these bodies are still covered with.

Most of the climbers have died in Mount Everest’s death zone due to extreme weather, avalanches, and exhaustion from continuous climbing besides its perilous topography. Unlike in plains nature preserves the bodies because of ice and snow, so the bodies keep piling up. Among the landmark dead bodies most famous are that of Green Boots, an Indian climber named Tsewang Paljor and Sleeping Beauty, Francys Arsentiev of US who died during the descent. In some cases, bodies preserved in the ice with even eyes open and hair flying in the air. More bodies might still be buried under the mountains of ice whose precise accounts no one knows.

Dead bodies are seldom removed because carrying it all the way down is extremely risky, very costly and could be fatal for the rescuers themselves. In some cases, the climbers wish to be left there if they die because of their love for the Himalayas and normally their families and friends honour it as their last wish.