The Palian village located in Wuhe township, southwest Yunnan province’s Tengchong city is a traditional village of Dai people. Under the support of local government and some artists, sightseeing and tourism have began to flourish here since last year. As farmhouses, orchards and folklore museums in Palian constantly hold workshops involving cooking, photography, traditional Chinese culture and fine art, a large number of tourists have been lured to this small village. Palian, therefore, is now considered one of the “most artistic” villages across the province.

Yang Xiugai, nicknamed A’gai, is a 30-year-old Dai lady who has never left Dalian — her home village. Sitting next to the Gaoligongshan National Nature Reserve, Dalian was once an isolated and impoverished village hiding deeply in mountains. “The life was extremely difficult. My family couldn’t even afford to buy a new cloth for me,” Yang recalled. 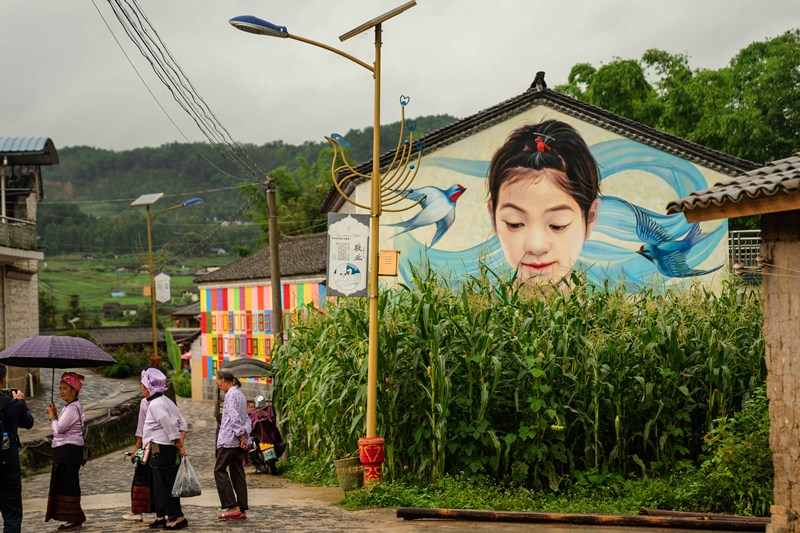 Since 2013 when China began to implement the policy of “targeted poverty alleviation”, villagers’ life in Palian has witnessed a great improvement. Roads, running water and electricity have all been available in the village; fruit farming is on the way to become Palian’s major industry. And more importantly, tourism has started to bloom under the support and assistance of local government of professional artists.

In just one year time, traditional Dai-style residences have been transformed into art galleries, and poems, paintings and creative graffiti can be seen on the walls across the village. Artists also turned seemingly useless and discarded objects into art pieces which amazes not only tourists but every villager of Palian. From 2019 onwards, farmhouses, orchards and folklore museums in Palian have started to hold workshops involving cooking, photography, traditional Chinese culture and fine art on a regular basis, and a large number of tourists have been lured to this once impoverished village. And Palian is now considered one of the “most artistic” village across Yunnan.

According to Zhang Zhangju, the deputy head of Wuhe township, Palian village currently has over 20 eateries and 6 families running agrotourism business. During the May Day Holiday this year between May 1 to 3, Palian welcomed about 3,000 tourists every single day.